Sometimes I wonder why I didn’t see the signs that Henry, my best friend, was addicted to heroin. Looking back now, it could have been because we were in college. Although the wildness of freshman year had passed us by, Henry was still going strong with the weekend benders so much that I didn’t notice that something had changed.

In the months to come, he would go through almost all the heroin addiction symptoms until the night I found him lying on the floor OD’d on heroin.

I still feel a lot of guilt that it took Henry overdosing to open my eyes to the truth that had been staring me in the face for far too long. Like most friends to heroin addicts, I did two things I wish I could go back and change. First, I gave excuses for Henry’s behaviors. “He is only stressed about lectures… he just liked to party… he isn’t addicted… he just used occasionally.”

Second, I accepted his excuses, especially when I knew that they didn’t add up. I guess a big part of me didn’t want to believe that Henry was a heroin addict.

To a lot of people in the world, this example of a story sounds very similar. At Enlight Treatment Center, we want to let you know if you are a concerned friend, and want to know how to help someone addicted to heroin, keep reading to know the signs and symptoms to look out for.

According to the National Institute of Drug Abuse, heroin is a type of opioid drug derived from morphine. On the streets, heroin is called smack, big H, hell dust, and horse.

There are two forms of heroin on the streets: pure heroin and black tar. The former comes in a white powdery form while the latter is black and sticky. Also, the color and consistency of the black heroine (black tar) come from impurities resulting from refining morphine to heroin.

How Is Heroin Used?

There are three main ways someone on heroin uses the drug:

It’s common for someone on heroin to prefer intravenous drug use because of the shorter reaction time.

How Can You Tell If Someone Is Using Heroin?

Friends and family of addicts often ask themselves why they didn’t notice the signs of addiction before it got too late. It’s easy to feel guilty about this, and to think things could have been different if you only knew, but please know it’s not your fault, and you are not to blame. If you suspect your friend or someone you know is addicted to heroin, here are some signs to look out for:

How to Help Someone Addicted to Heroin

The best thing to do for a friend who is addicted to heroin is to get them or encourage them to seek professional help. If you think they will be reluctant to look for help themselves, you can start the process of seeking treatment on their behalf.

At Enlight Treatment Center, we can help your friend overcome this horrible addiction. We offer detoxification services, inpatient rehab treatment, and dual-diagnosis services for addiction. Please reach out to us today for more information regarding our program! Recovery awaits you or your friend. 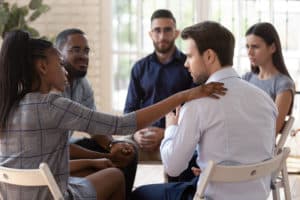